This past December Bo Hermanson, (Canadian Society of Maritime Artists), and NAC-VI member was recognized for his long-term contributions in telling the RCN story through art with a Naval Association of Canada Gold Medal..

In the fall had the opportunity to enjoy the Hermansons hospitality at their charming house in the rural outskirts of Victoria, BC during an afternoon where as a privileged visitor I was given a peek into the imaginative world Bo has created there. Surrounded by the artwork, mementos, ships models and reference books of a lifetime of creative efforts in marine and naval art Bo guided me through his studio that included a life-sized and fully functional flight simulator of a Boeing 707 cockpit! The 707 flight simulator was impressive enough but it was complimented by a replica of a ship’s cabin next door! Amongst the cornucopia of items of interest is a framed certificate attesting to 500 days spent at sea with the RCN of which Bo is justifiably proud.

So how, when and where did this long association with the RCN begin. Bo, born in Sweden served at sea in the merchant service as a young man before coming to Canada and later studying architectural design in Los Angeles. Upon returning to Canada in Vancouver he met his wife Christina and worked as a design consultant. In 1981 moving to Victoria with more time to devote to his long-term interest in marine painting he was encouraged to focus on the RCN for subject matter after a chance meeting with RCN Commanders Craig Campbell, Gregor MacIntosh and Bob Luke. Commissions for naval paintings soon followed and so began a close association with the Canadian Navy of twenty years that included over five hundred days spent at sea with the RCN and produced roughly 50 original paintings, along with over 10,000 prints, illustrating the ships and operations of the RCN.

The meticulous research and dedication to accuracy in Bo’s artwork, as also evidenced in his other pursuits, produced paintings that very accurately depicted the ships of the RCN and the conditions at sea they operated in. Apart from his professionalism as an artist Bo related in our discussions while viewing his artwork or touring his studio his great enthusiasm for, and pride in, his long association with the RCN. His award of the NAC Gold Medal, along with his many other accolades, are well deserved and warrant a ‘Bravo Zulu’ for his role in bringing the navy to the wider public audience ashore through the appeal of art based on his experiences at sea. 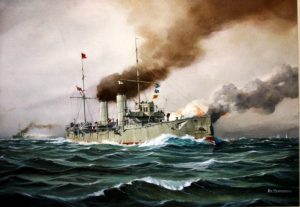 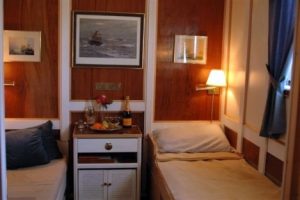 Bo at the controls in his full-scale Boeing 707 flight simulator in s simulated flight over Seattle, Washington, USA. 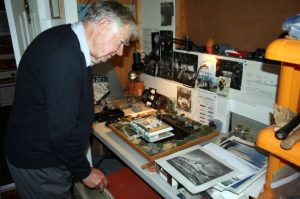 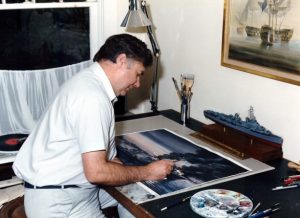 A younger Bo working on his painting of HMCS CAYUGA 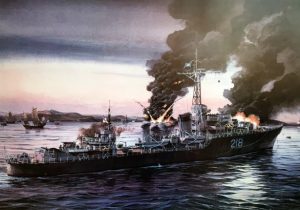 Bo’s painting of HMCS CAYUGA during the evacuation and subsequent shore bombardment of harbour facilities in the port of Chinnampo, Korea in order to deny these to the advancing North Korean Army on December 5th, 1950. 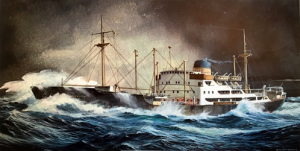 Painting of MS Minnesota in the North Atlantic. Bo sailed in this fine Swedish cargo vessel as a youngster of sixteen training as an officer cadet. A beautiful model of the ship has a prominent place in the Hermanson home. 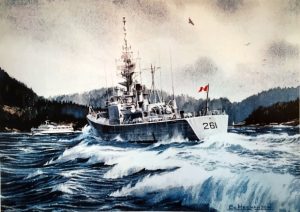 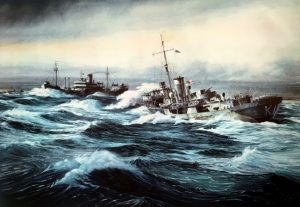 Bo’s portrayal of a scene from the Battle of the Atlantic as HMCS SNOWBERRY closes on a convoy Commodore’s ship for Morning Orders. This painting was gifted to the Naden Wardroom.