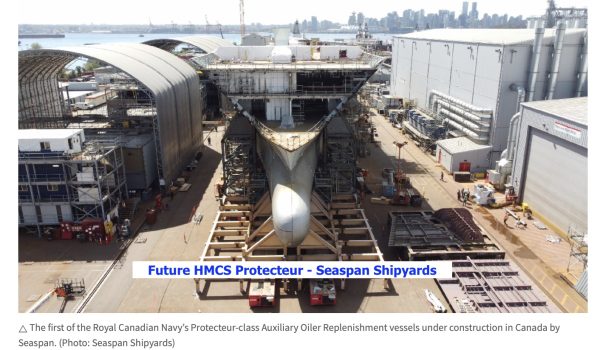 Your weekly national and international naval news for the week of February 4th, 2022

Edition 447 “The Russian circle around Putin, they really do want to teach the Ukrainians a lesson.  And they don’t shy away from killing lots of people or seeing lots of people get killed.” 8 January 2022, Fiona Hill, Associated Press.

Links to keep in touch with the NAC and RCN can be found at the bottom of this email.  Contact David Soule executivedirector-nac@outlook.com if you wish someone to be added to the NAC News email distribution. (Perhaps an influencer or a good candidate to become an NAC member)

7 February 2022 19:00 Ottawa time NAC-O’s GoToMeeting Speakers Evening with guest speaker for February will be Mr. Shaun Padulo, President of Heddle Shipyards.  Mr. Padulo will present an overview of the capabilities of Heddle, and will also speak about some current projects and past refits of HMCS Haida.  Register at WildApricot Registration.

NEW 9-11 March 2022 CDAI 90th Ottawa Conference Security and Defence.  The Ottawa Conference is an annual gathering of Canada’s defence and security community.  CDAI is an umbrella group for organizations who represent 400,000 active and retired members of the CAF, the event brings in foreign guests, Canadian government leaders, academia, and the business community to reflect on how to make Canada and the world safer. To Register.  (Note – free to students)

28 April 2022  – BOA Gala Dinner – Subject to COVID restrictions, the Dinner will be held on the evening of 28 April 2022, the Thursday before Battle of the Atlantic Sunday. The NAC will honour Canada’s Naval Veterans with a special evening at the Canadian War Museum in Ottawa. Mark your calendars and details to unfold.

14-16 November 2022 – Due to onging COVID restrictions the organizers of MSC22 have postponed the planned March event to November. This now in-person event will take place in Victoria, BC.  The draft program for this November’s MSC22 is now posted on the MSC website and is available on the MSC social media channels.

CDAI: Competing Strategic Objectives in the Indo-Pacific: Implications for Canada (Editor – thought-provoking and a mix of info during a 1:31:02 hr webinar)

Tail cracks on military’s new helicopters likely due to weight of equipment: DND and DND says cracks in 11 of 21 Cyclone maritime helicopters have been repaired

FIRST READING: Military tells Ottawa to find someone else to evict the truckers

Canadian Naval Review  annual essay competition.  A prize of $1,000 provided by the Canadian Naval Memorial Trust is awarded for the best essay.  The winning essay will be published in CNR.  Other non-winning essays will also be considered for publication, subject to editorial review.

Owners of Cormorant pay up for oil spill clean up in Bridgewater, N.S.

Editor – NAC-O’s Volume 11 of our Salty Dips Series is available in hardcover, paperback, and electronic versions.  This edition contains extracts of the diaries of a submarine commander during the cold war and many other stories.

Editor –  It was recommended by an NAC member that I trial the shortening of the format of the RCN history section and only covering the upcoming week’s events, plus we are adding wartime merchant ship sinkings (some amazing stories).  We are working on posting the full calendar on the NAC website to make it fully accessible year-round.

US Navy carrier Ford to go on unusual deployment this year

Here’s Why India Is Deploying A Lot More Warships

A Maritime Strategy to Deal with China

China to give second-hand submarines to Thailand

Russia-Ukraine tensions: Powers clash at UN Security Council (Editor – and a different perspective)  On target: Putin is playing NATO like a fiddle

Overstretched and underfunded – the decline of Europe’s navies

US To Send Warship, Fighter Jets To Assist UAE After Yemen Houthi Attacks

Shackleton’s Endurance: The impossible search for the greatest shipwreck

When the Soviet Navy Lost 16 Admirals in a Single Accident: The Tu-104 Crash at Pushkin (Editor 24:28 min video)

THIS WEEK IN RCN/MARITIME HISTORY – 5-11 Feb

If you see any omissions or errors please inform me, and any more modern significant dates are also welcomed.  The list draws primarily from the Directory of History and Heritage’s comprehensive “Significant Dates in Canadian Military History”, the now defunct “Canada Channel”, “Legion Magazine”, The Naval Service of Canada, Its Official History Vol 1-3, and Roger Litwiller’s excellent web site, encyclopedic guidance from Fraser McKee, the Uboat.net site, and anywhere else I can find credible information.  For a comprehensive list of the staggering merchant losses – sunk, damaged, or lost – here is an excellent web page: Canadian Merchant Ship Losses of the Second World War, 1939-1945 by Rob Fisher {Revised June 2001})